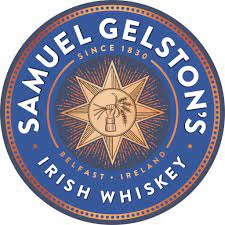 Gelston’s Old Irish Whiskey was founded in 1830 by Samuel Gelston, a prosperous wine and whiskey merchant from Belfast. Upon Samuel’s death in late 1869 Henry James Neill (Harry) purchased the business and developed the scale of the business considerably both in Ireland and in overseas markets. Five generations later, the company is still run by the Neil family and continue producing innovative and high quality whiskeys.

Samuel Gelstons will be offering samples of: